Stiesdal is building an ambitious SkyClean plant at GreenLab in Skive, showcasing how Denmark can take a leading role in agriculture's green transition

The green technology company Stiesdal has decided to place its first 2 MW SkyClean plant in GreenLab near Skive. The company's pioneering pyrolysis technology utilizes straw and other agricultural residues to make green fuel and capture and store CO2. The new SkyClean plant in GreenLab will be ten times larger than Stiesdal's current test plant and constitutes an important step towards a commercial roll-out of SkyClean.

With the SkyClean technology, agricultural waste will play a significant role in the green transition. Initially, the plant at GreenLab will use residual biomass to produce biochar for CO2 storage and soil improvement as well as gas for heat. In the longer term, the plan is to combine the pyrolysis-based SkyClean technology with green PtX hydrogen to produce CO2-negative fuels for aircraft and other parts of the transport sector that are hard to electrify. In this context, the synergy between Stiesdal and GreenLab's green energy park has played an important role in the choice of location for the upcoming SkyClean facility.

Quote, Henrik Stiesdal, CEO of Stiesdal A/S:
"At GreenLab, we have found a partner who is at the forefront of the development of green technology and who, like us, looks at the entire energy infrastructure in the green transition. GreenLab's focus on sector coupling and the interconnection between agriculture and industry holds many exciting perspectives for us, and it is very likely that more of our technologies can come into play at GreenLab."

The GreenLab energy park focuses, among other things, on the production of green hydrogen with Power-to-X and on promoting and supporting research in green technologies.

Stiesdal's selection of GreenLab as a key development location coincides with GreenLab's recent award of DKK 20 million by the VILLUM FOUNDATION to create large-scale projects from GreenTech ideas.

Quote, Christopher Sorensen, GreenLab CEO
"We are proud that Stiesdal has selected GreenLab as the site for its new SkyClean facility. For us, it is proof that we have reached our goal of being the most attractive platform for new green technology.

It bears fruit that we produce green hydrogen on a large scale and that from the beginning, we have focused on circular thinking and the link between agriculture and green industry.

Additionally, there is a perfect match between us in that we, like Stiesdal, have a close collaboration with DTU and a number of other technical universities."

A game changer for agriculture - climate reductions without production decline
Experts from the Technical University of Denmark and Aarhus University have estimated that Danish agriculture can reduce its greenhouse gas emissions by 50 percent using the SkyClean technology. For agriculture, facing significant CO2 emission reduction demands, this makes SkyClean a potential game changer.

"Agriculture's CO2 emissions must be reduced. If we can realize the potential in the SkyClean technology, then agriculture can achieve a high climate effect without a decline in production, something that would make Denmark a pioneer in the green transformation of agriculture ", says Peder Riis Nickelsen, CEO of Stiesdal Fuel Technologies, the Stiesdal subsidiary developing SkyClean.

How SkyClean works
The core of SkyClean is a pyrolysis process in which organic waste from agriculture and forestry is converted into biochar, gas, and oil by heating to a high temperature without the presence of oxygen. 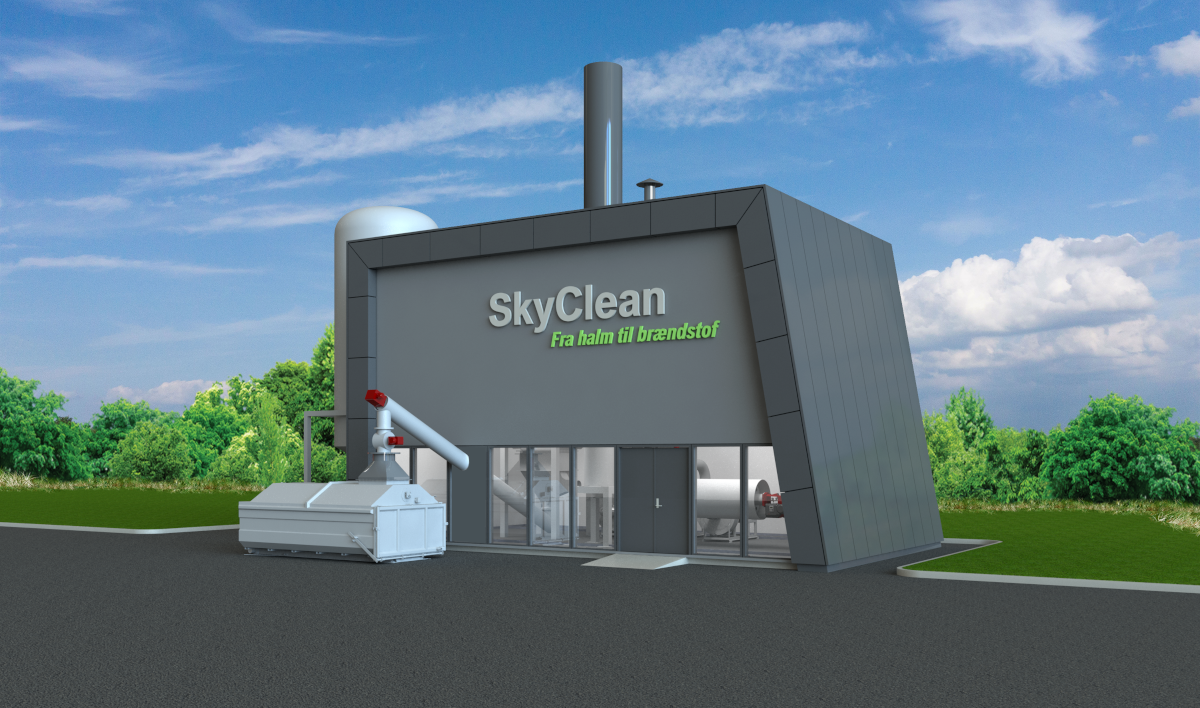 Dry plant material typically contains approx. 50% carbon that the plants have extracted from the atmosphere in the form of CO2.

In the pyrolysis process, half of the carbon in the waste is converted to biochar, while the other half becomes oil and gas. Biochar is a stable material that only decomposes very slowly, and half of the carbon that turns into biochar is thus effectively removed from the atmosphere.

Half of the carbon that does not turn into biochar comes from the pyrolysis process as gas and oil. The gas can be used as fuel in the heat supply and industry, and the oil can be refined into fuel for the transport sector - including aircraft.

About GreenLab
GreenLab is a green and circular energy park, a technology enabler and a national research facility for green energy. GreenLab is specialized in accelerating research and technology to scale, and our concept transforms the way green energy is produced, converted, stored and applied. We test theories in practice and look for viable green solutions to the world’s biggest challenges. The ambition is to export GreenLab’s model of technology and collaboration to the rest of the world. Let’s create a powershift!

About Stiesdal
Stiesdal A / S is headquartered in Odense and has locations in Give and Copenhagen. The company operates four subsidiaries, each with a focus on their own green technology where Stiesdal Fuel Technologies has developed the SkyClean technology, which can produce CO2-negative fuel for aircraft. This is done through pyrolysis where biomass is converted into biofuel for air transport while CO2 is captured and stored from the atmosphere.